Located in the Roaring Fork Valley, Carbondale began as a cattle ranching and farming community. Those well-planted roots flourish to this day. Local food production, much of it grown organically, has created a food-to-table movement at restaurants in the small mountain town.

Additionally, Carbondale’s setting at the base of Mt. Sopris and along the shores of the Roaring Fork River has created a thriving outdoor recreation culture where year-round adventures are possible. Top activities include cross-country skiing, ice climbing, fat biking, and in warmer weather road and mountain biking. Fly-fishing on the region’s acclaimed Gold Medal Waters is yet another multi-season attraction.

Carbondale is also a designated Colorado Creative District, a fact that pays homage to a community teeming with creative organizations, artists and artisans of all varieties. It’s the perfect place to enjoy galleries, art walks, First Friday celebrations and all kinds of creative pursuits. 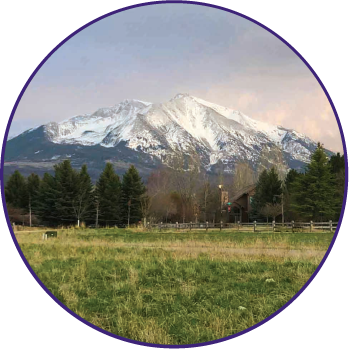 Majestic Mt. Sopris tops out at 12,953 feet above sea level. Even though Colorado is known for 53 peaks over 14,000-feet, Mt. Sopris which almost reaches 13,000-feet has some unique attributes—two distinct summits located just one-half-mile apart, and from base to peak it boasts more elevation gain than any other mountain in the state! 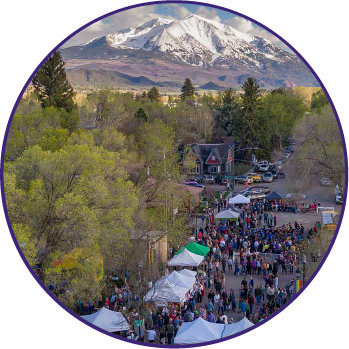 Carbondale was once the potato growing capital of the United States and the community still celebrates the fact every fall at the annual Potato Days Festival.

A Quick History of Carbondale

Like many other places in western Colorado, the first known inhabitants were the Ute people. A nomadic group, in prehistoric times they traveled on foot and later horseback as European explorers introduced the animals to the Americas. A tribe of hunter-gatherers, their lifestyle was forever altered with the influx of settlers in the 1800s.

Early pioneers arrived in the Carbondale area in the 1880s seeking the opportunity to acquire land for ranching and farming. While life on the ranch was rural and rustic, in town it was a little more rough-and-tumble. At one point, the tiny downtown strip was home to 13 flourishing saloons!

There’s no missing Mt. Sopris when visiting Carbondale. The nearly 13,000-foot peak is a majestic landmark that presides over the town from nearly every angle. It was named for Captain Richard Sopris who surveyed the area on an expedition in 1860. Sopris later went on to become mayor of Denver.

The ranching life is alive and well in Carbondale. To this day, the town is known for its prize-winning livestock, thrilling Wild West summer rodeos, and biannual cattle drives that run herds right down Main Street!