A Colorado wonderland of adventure and relaxation

An authentic 21st century town, Durango is both a modern college town with fresh amenities and a destination that remains true to its western heritage.  The influx of students adds a youthful vibe that’s immediately apparent in the lively arts, culture and culinary scenes. Taking a trip back in time is as easy as strolling past Victorian architecture or boarding the Durango and Silverton Narrow Gauge, a scenic steam train tour.

Durango is also a year-round adventure wonderland with an abundance of outdoor recreation opportunities from skiing to dogsledding, hiking and biking to horseback riding,  and fly-fishing to mountain biking.  Nearby Mesa Verde National Park and the San Juan National Forest offer additional opportunities for learning and exploration.

Eight miles north of downtown Durango, visitors can further partake of the region’s natural beauty. With the Animas Valley as a backdrop, Durango Hot Springs & Spa is the ideal spot to relax when visiting the Four Corners region. 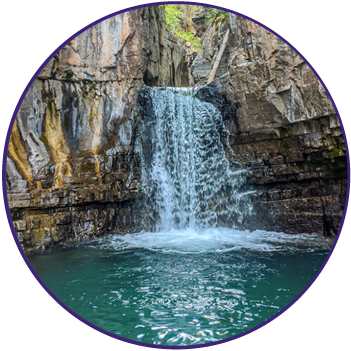 A Quick History of Durango

Some 1,200 years before settlers came to the banks of the Animas River in Durango, Native Americans camped along its shores. These ancient peoples are referred to as Ancestral Puebloans. The elaborate cliff dwellings located at nearby Mesa Verde are attributed to them.

At the same time Americans in the colonies were fighting for their independence, Spanish missionary explorers— Dominguez and Escalante—two Franciscan friars, passed through the Durango area on their quest to find a safe overland route between Sante Fe, New Mexico and Monterrey, California.

The Denver & Rio Grande Railway line between Durango and Silverton was constructed to haul silver and gold from the San Juan Mountains. However, because of the stunning vistas along the way, it was also promoted as a scenic route for passenger travel and the narrow guage railway remains a popular attraction to this day.

Even before Durango was officially founded in 1880, gold miners discovered the area was rich in precious metals. When the train arrived in 1882, the town grew exponentially and became a regional center for smelting. After WWII, mining shifted from precious metals to uranium. The Durango Mill, a uranium company, operated 1942 to 1963.

In 1878, Fort Lewis was an army outpost located in Pagosa Springs. It served as a school for Native Americans and, for a while relocated to Hesperus. Eventually, in 1956, Fort Lewis became a school for higher education in Durango. In keeping with its lofty position atop Reservoir Hill, the college chose the Skyhawks as its current mascot in 1994.