Charismatic Colorado charm with scenery that rivals the Swiss Alps

These two Colorado towns are postcard-pretty retreats. Ridgway is known as the gateway of the San Juan Mountains. Surrounded by public lands with a network of trails for hikers, bikers and winter sports enthusiasts, Orvis Hot Springs is beautifully landscaped and of Colorado’s most esteemed clothing-optional hot springs. Accommodations and dining are abundant in both locations. 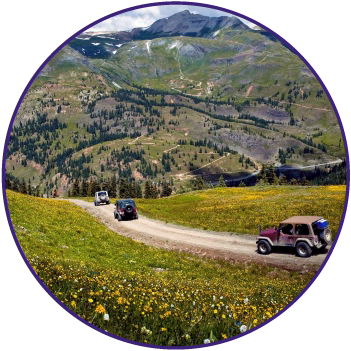 During the warm months, 4-wheel-drive adventures are a must in Ouray’s scenic mountains. Because of this, the destination is known as the “Jeeping capital of the world.”

From December through May, visitors to Ouray will likely be greeted with, “Have an Ice Day!” The town’s Ice Park is home to more than 200 ice and mixed climbs.

A Quick History of Ouray and Ridgway

Frequented for centuries by Native Americans, the town of Ouray is named for the legendary leader of the Tabeguache and Uncompahgre bands of Southern Ute tribes. Its original Ute name was “Uncompahgre,” which means “hot water springs.”

The surrounding mountains were rich in precious metal ore drawing miners to the boomtown. Mining continued to be a vibrant part of the local economy until the 1980s. It was mining that created the web of back-country roads, including those used by outdoor enthusiasts today.

The two-lane Highway 550 out of Ouray is also called the “Million Dollar Highway.” It is believed that was the cost to build the precipitous, cliffside roadway that is part of the San Juan Skyway, a Colorado Scenic Byway.

Ouray, Colorado is a National Historic District with exquisitely preserved Victorian-era homes, hotels and other structures.

Ridgway began as a railroad hub, serving the nearby mining towns of Telluride and Ouray. The Ridgway town site is at the former northern terminus of the Rio Grande Southern Railroad where it met with Denver and Rio Grande Western Railroad. Those trains no longer operate but the town has a world-class Railroad Museum and a historic depot.