Water—in all its wonderful and varied forms—has been a source of lively, action-oriented things-to-do in Glenwood Springs. Visitors can go rafting through scenic Glenwood Canyon, hike to the geological wonder that is Hanging Lake, explore caves created by receding waters, zipline across the Colorado River and fish in Gold Medal-designated waterways. A manmade wave at the whitewater park is a highlight for kayakers and paddleboarders. When water turns to snow in winter, there’s skiing, snowmobiling and other frosty delights at Sunlight Mountain Resort.

Most famous of all its water-centric activities, however, is Glenwood Springs’ geothermal attractions. The town’s mineral-rich waters and steam caves continue to be a wellspring of recreation and relaxation for Colorado travelers. They include Glenwood Hot Springs Resort, Iron Mountain Hot Springs and Yampah Spa & Vapor Caves. Lodging and dining are located conveniently nearby. 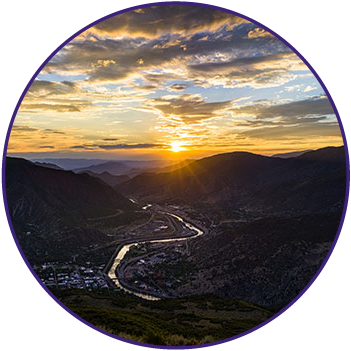 The city of Glenwood Springs is located at the confluence of the Colorado and Roaring Fork rivers. Combined with a significant hot springs presence, the area has earned the nickname “The Land of Water.” 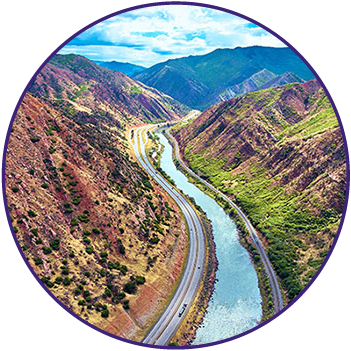 Driving through Glenwood Canyon is a scenic treat. Interstate 70 is split into two levels, which was a 12-year project that cost approximately $490 million to construct and is still considered one of the greatest engineering achievements in the U.S.

A Quick History of Glenwood Springs

Captain Richard Sopris, for whom Mt. Sopris is named, was one of the first explorers to lay eyes on the verdant, geothermal valley in the 1860s. Later, James Landis settled at the confluence of the area’s two rivers. That location would become the downtown heart of Glenwood Springs.

The railroad arrived in 1887, bringing with it an influx of workers and tourists, transforming Glenwood Springs from a mining, gambling and brothel town to a high-brow hot springs destination for the privileged classes.

Town father Isaac Cooper, on the urgings of his wife, changed the town’s name from Defiance to the more genteel Glenwood Springs. Another founder, Walter Devereux, deployed his wealth to bring his geothermal dreams to life. In 1888, he opened the Glenwood Hot Springs Pool and in 1893 welcomed the first guests to stay at the Hotel Colorado. Even in those days, travel itineraries included the Vapor Caves for underground steam baths and the Fairy Caves, which were billed as the Eighth Wonder of the World.