There’s more to hot springs than just soaking. The Yampah Vapor Caves are an unusual phenomenon—underground steam baths in a natural cave setting. Hot mineral water flows through channels in the cave floors, filling the chambers with mineral-rich vapors or steam.

Reputed to relieve ailments from arthritis to the common cold, visitors extoll the cleansing, detoxifying qualities of the natural steam baths.

Consisting of three adjoining caves, the passageways and chambers are adequately but dimly lit to enhance the mood of tranquility. Guests can recline on marble benches in each cave. For a break from the heat, guests can douse themselves under cold-water spigots, retreat to the Serenity Room or take the fresh air on the outdoor deck.

The Yampah Spa & Vapor Caves are the only naturally occurring vapor caves in North America. 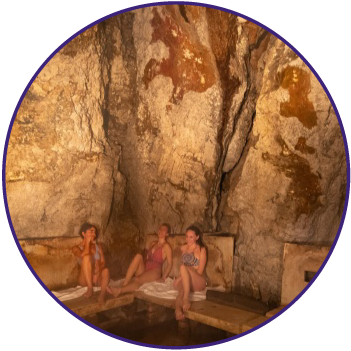 Native Americans, specifically members of the Ute tribe, utilized these vapor caves for centuries, regarding them as a sacred site for healing, ceremonies and rejuvenation.

A Quick History of the Yampah Spa & Vapor Caves

In all of North America, the Yampah Vapor Caves are the only known natural vapor caves—all others are manmade excavations. They were first used by Native Americans for purification, healing and rejuvenation. The name, Yampah, means “Big Medicine” in the Ute language.

Early Glenwood Springs pioneers referred to the current location of the Yampah Spa as Cave No. 3. Cave No. 1 was situated across the river and sealed up when the railroad came through in the late 1880s, and Cave No. 2 required crawling through a narrow tunnel to access a standing-room-only chamber.

Originally the vapor caves were developed as part of the Hot Springs Pool complex, which also included the Hotel Colorado. In those days, for modesty’s sake, men and women wore heavy sackcloth coverings and had separate times for steam baths.

The Vapor Caves have changed hands several times over the years. The current owners purchased the iconic health destination in 1990, overseeing major expansions and improvements to the property.