The log cabins date back to the early 1900s and recall a time in American history when pioneers came to the area to seek their fortunes in gold and silver mining. These days, Antero Hot Springs Cabins offer guests a quiet, peaceful respite in a busy world that is hard to escape.

Each cabin has access to its own private hot springs soaking pool. The pools are organically shaped and filled with geothermal water that contains 15 dissolved minerals and ranges in temperature from 110° to 112°F (38° – 44°C). 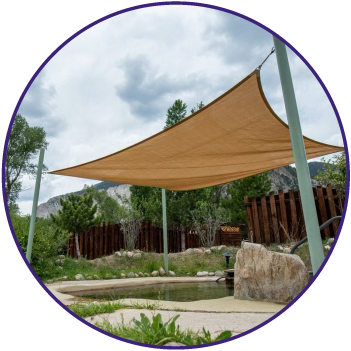 If you look closely, you might be able to spot big horn sheep and mountain goats roaming on the nearby cliffs. Along with deer and elk, these animals call the area home and are frequently spotted by guests. 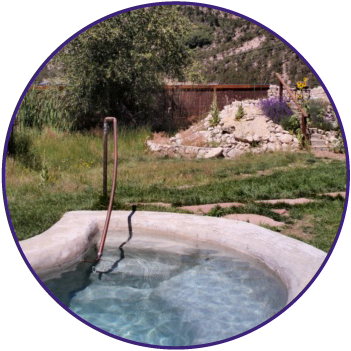 Each cabin features a private, large hot spring pool available for guest use. Each of these pools were hand-crafted and are filled with mineral-rich pools that are low in sulfur, which keeps any egg-like smells at bay.

The Hortense Cabin at Antero Hot Springs Cabins dates back to 1904. It is named for a woman of whom not much is known, though she is a legend of sorts; there are mentions of hot springs, a hotel, a bridge, a mining company and a town all named after a certain Hortense.

Or, Perhaps A Shady Lady?

A serial entrepreneur, Hortense is also thought to have run a highly successful house of ill repute. The cabin named after her served as her home and later became a schoolhouse. The Cottonwood Cabin operated as the local post office.

The current owners purchased the property in 2004, restoring the historic cabins and creating the beautifully shaped hot spring pools that visitors enjoy today. Because of its secluded location, four-legged visitors often make an appearance on the property, including big horn sheep, mountain goats, deer and elk.