Ouray Hot Springs Pool features five separate geothermal pools, each with a designated purpose. The pools range in temperature from a relatively cool 74° to a toasty 106°F (23° – 41°C).

The Shallow Pool is a family-friendly area with a volleyball court, basketball hoop and an area for floaties. The curvaceous Hot Pool is the warmest, with ample submerged seating for total relaxation. The Overlook Pool is an adult haven situated to take advantage of the magnificent views of the San Juan Mountains. For those who want to work-out, pick from one of eight lanes in the Lap Pool. Open during the summer months only, the Activity Pool is a water-centric playground with a Wibit inflatable obstacle course and a climbing wall.

In addition to the hot springs, guests can also purchase Fitness Center day passes as well as schedule massage treatments. 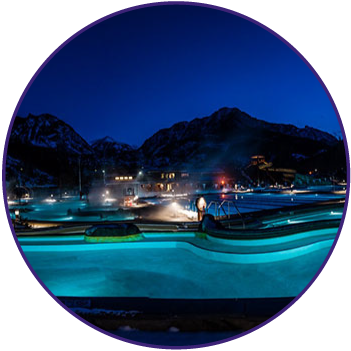 The geothermal water of Ouray Hot Springs comes from the Box Canyon source, where 100 gallons-per-minute are gravity-fed over a mile to the pool. 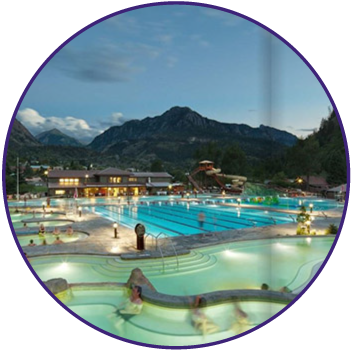 The Ouray Hot Springs facility originally opened on July 4, 1927, with one of the largest crowd’s in Ouray’s history gathered at the iconic oval-shaped pool.

The area’s springs were considered sacred by the Native American Ute tribe who settled in the Uncompahgre Valley. In the 1870s, prospectors and miners chasing their fortunes discovered them as well and it wasn’t long before the Utes lost their native lands, including the hot springs.

In the 1920s, Ouray’s civic leaders created the first public hot springs swimming pool. It took six years to finance and build, opening at last in 1927. At the time, the event drew the largest crowd the small town had ever seen.

The City of Ouray has operated the hot springs ever since. In 2012, realizing the historic property was badly in need of some TLC, the town again banded together to raise funds for a new and improved facility. In 2015, the city adopted a masterplan and in 2016, work on the multi-million-dollar project began. The activity-specific hot springs pools allow visitors to enjoy the geothermal waters as they see fit.