A Rocky Mountain destination in Northwest Colorado, Steamboat Springs is a year-round outdoor playground and a historic town where western heritage meets abundant adventure. From world-class skiing on Champagne Powder® in the winter months, Steamboat Springs has more Olympians than any other town in North America. Summers are filled with miles of single track, endless county roads, tubing the Yampa and soaking in our famous hot springs, golfing among the peaks and valleys, and exploring the abundant lakes, rivers and streams that dot the landscape. Downtown Steamboat Springs pays tribute to its ranching roots with a renowned weekly rodeo, heritage shops and outfitters, and a culinary community that takes homegrown to new heights.

The historic hot springs in Steamboat Springs are one of the reasons the town exists today. Old Town Hot Springs is in the heart of downtown Steamboat while Strawberry Park Hot Springs is an adventure on the edge of the Yampa Valley. Both offer a relaxing soak and a refreshing dip into Steamboat’s colorful history.

The snow in Steamboat Springs is so good it’s trademarked! Thanks to world-class skiing on Champagne Powder®, Steamboat has more Olympians than any other town in North America. 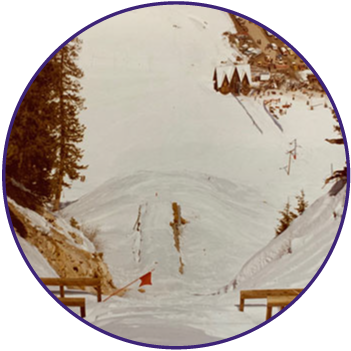 A Quick History of Steamboat Springs

The resemblance in sound and sight of a geyser-like hot spring caused French trappers to name the region Steamboat. By the 1870s, all those who passed through the area—trappers, explorers, miners and settlers—referred to it as Steamboat Springs.

James Harvey Crawford moved his family from Missouri to Steamboat Springs in the 1870s. He managed to convince a government agent that the springs were of no value and obtained the patent on his claim in 1876.

The arrival of the Denver, Salt Lake and Pacific Railroad in 1908 created a tourism boom that included visiting the Steamboat Hot Springs. To provide an inviting atmosphere for guests, the town remodeled the facilities to include a large outdoor pool and a new bathhouse with smaller private pools and steam rooms.

Coined by Joe McElroy in the 1950s after a day on the slopes, he said the snow tickled his nose like champagne. Steamboat’s snow averages just six percent water. No other ski resort has its snow trademarked.