An oasis in the middle of the scenic San Luis Valley, Sand Dunes Recreation offers a mix of opportunities for family fun and adult relaxation. The centerpiece attraction is a large, outdoor geothermal hot springs pool, maintained year-round at 98˚F. A smaller, hotter pool and a children’s pool are situated beneath an enclosure that shields bathers from the wind and weather.

The Greenhouse caters to the over 21 crowd. An indoor tropical paradise, it features lush plantings, a zero-depth 10-foot by 75-foot pool, plus another three pools of varying temperatures, a dry sauna and outdoor patio spaces with fireplaces. Guests can enjoy libations as well as small plates from the Steel Box bar.

Visitors of all ages are welcome to satisfy their appetites with delicious meals at the Mile Deep Grille near the main pool. The restaurant boasts a huge menu. Unlike other hot springs, Sand Dunes permits guests to bring food onto the premises. There are even charcoal grills and grassy spots for picnics! 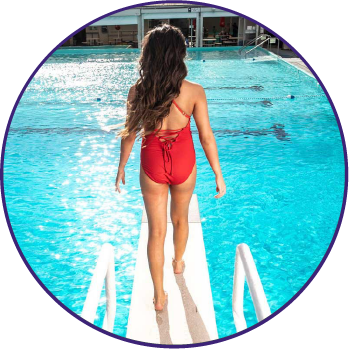 Hooper Colorado, where Sand Dunes Recreation is located, is tiny but mighty. A recent census revealed the number of residents was just 103! In addition to hot springs, the diminutive town is home to big sky views of the galaxy and big game trophy elk coveted by hunters.

Originally called Garrison, after Texas rancher William Garrison, the town where Sand Dunes Recreation is located was renamed Hooper in 1891, in honor of Major Hooper, the General Passenger Agent on the D&RG railroad at the time.

In the 1930s drillers were exploring the region for oil, instead of striking “black gold,” roughnecks discovered a hot spring instead. With a prolific flow and a temperature of 118˚F, it is the geothermal source for Sand Dunes Recreation.

Of all Colorado’s hot springs, this is likely the only one where the hot springs pool was once used as fish habitat! During the early 80s, the “Hooper Pool,” contained a community of warm and relaxed commercial catfish!

From the mid-80s until 1995, the pool was in essence abandoned. There was no swimming and fishing operations also ceased. The pool and facilities lay dormant for 10 years.

The family-owned facility began major renovations to the property in 1995. They deepened and expanded existing pools. Over the years they have added many more amenities and continue to improve the property for the enjoyment of visitors.